A Leggy Blonde, an American Blonde, a blonde named Charity, and something Reckless walked into a Hanover brewpub …

Well, that isn’t exactly how the story goes. The three blonde ales and an IPA named Reckless already have a place at the bar – all four are drawing crowds at Hanover brewpubs. No joke. Hanover realized that the best pairing for a salty snack capital is a craft beer mecca. 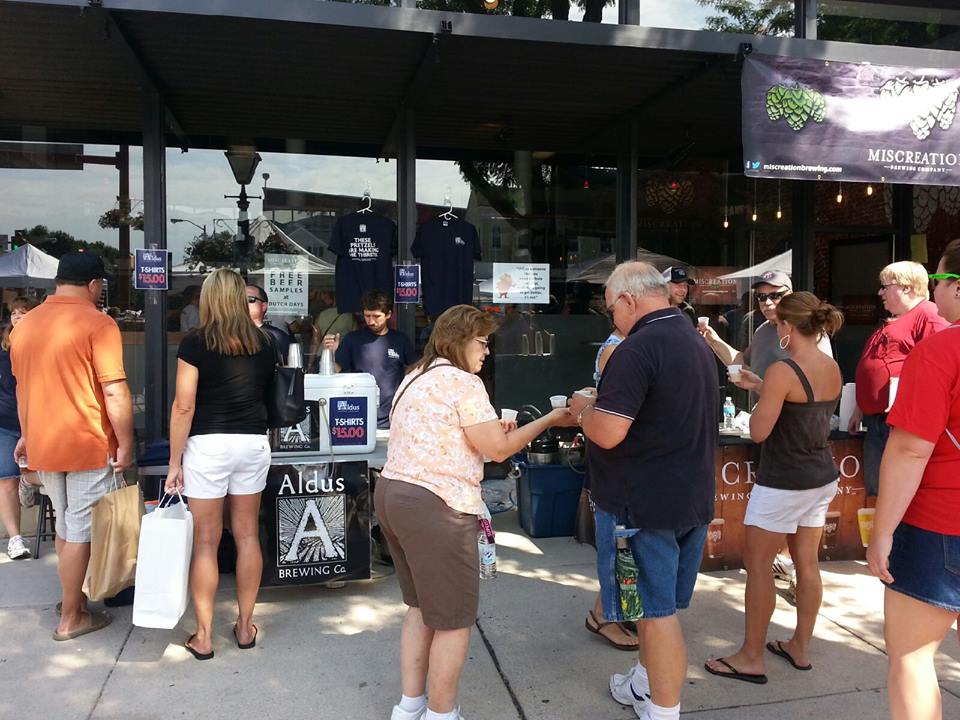 Warehouse Gourmet Bistro & Brew Pub started selling its craft beer in 2012, leading the way in Hanover. A year ago, the second one came along – Aldus Brewing Co. – with a sharp eye on brewing and wider distribution. Miscreation Brewing Co. opened earlier this year in Hanover’s Center Square, helping to revitalize the downtown area, and Something Wicked Brewing opened close by on June 5.

In an unassuming brick building in a quiet neighborhood, Aldus Brewing ferments its beer in an adjoining space to the tap room. A crowd trickled in early on a Friday afternoon for fresh beer, just after the brewpub opened at 3 p.m.

This was the vision of owner Jason Minninger. He had been a graphic designer in Baltimore several years ago, dreaming of another life.

“I was doing it for too long, and I was miserable,” he said. His wife, Kate, asked him what would make him happy, and he answered easily: making beer for a living. He searched Baltimore and his hometown of Philadelphia for a place to build his plan. Nothing suited him, until his wife suggested her hometown of Hanover.

“This” is production brewing, a place that can brew, sell, and distribute beer. “Here” is a town he has come to love. “Hanover represents what America is to me.”

What you should know:

Flagship beers: American Blonde Ale, Olde Factory Amber and Wee Dame, all available in kegs, growlers and on tap. Another couple of beers are usually available as well. Recently, that was This is KNOT IPA and Wallflower Wit Ale.

To find a blonde at Something Wicked Brewing, disregard the storefront on Broadway; the entrance is around back in the alley.

It officially opened as a pub at 4 p.m. on a Friday, and the room packed quickly. One of the customers wore a T-shirt, “Charity hops for humanity,” to celebrate Something Wicked’s blonde ale, Charity. For each glass of that ale, Something Wicked donates $1 to charity; all Charity T-shirt sales go to charity as well.

Wicked is the creation of a team of owners – Steve Buenzow, Bill and Bridget Seidler, Scott Pivoris, and Cindy and James Staub.

The owners have a barrel-and-a-half brewing system that they hope to get to three to five barrels some day. The pub is wide open with tall and short tables, a long bar, and plenty of seating. The owners are renovating the front of the building into what will be a much larger bar space for them. They hope to have it completed by the end of summer.

Food: Short pub menu with items such as chicken tenders and flatbread pizzas.

Location: 34 Broadway, Hanover. Walk around to the backside of the building in the alley for the main entrance.

Around the corner from Wicked sits Miscreation Brewing, which has an open floor plan with dining downstairs and the bar upstairs. It was launched in March by Mark Mathias and his business partners, Brent and Jason Stambaugh.

Even before Mathias and the Stambaughs opened Miscreation, the hope was that it would help entice more people to Center Square. Last weekend, Miscreation teamed up with another trendy downtown hotspot, Hanover Hub, for a Beer & Breakfast event to do just that.

Warehouse Gourmet is named for its history as a warehouse – at different times, a cigar factory, ribbon factory, furniture manufacturer, frame shop, storage facility and, eventually, the Screaming Peacock Studio, where current owner Keith Stambaugh worked as an abstract artist before he and his wife, Melinda, started catering and eventually renovated part of it into a restaurant and the second floor into a brewpub.

The downstairs restaurant serves all homemade food and carries the quaint exposed brick and hardwood floors to the pub upstairs, a cozy location with a small bar. On a recent Friday, the restaurant rotated customers through, and friends gathered around the bar upstairs to eat and drink.

Food: Homemade food from start (rustic wheat bread with cayenne and honey butter) to finish (chocolate chip espresso brownie). In between, try a meatloaf sandwich on thick bread (go hungry) or a fresh fruit and chicken salad or the crab grilled cheese. The menu is extensive.